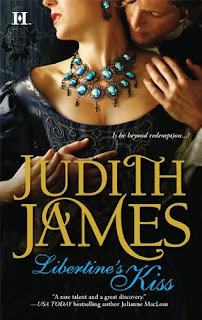 “Abandoned by his cavalier father at a young age, William de Veres grew up knowing precious little happiness. But William has put the past firmly behind him and as a military hero and noted rake, he rises fast in the ranks of the hedonistic Restoration court. Though not before he is forced to seek shelter from a charming young Puritan woman-
The civil wars have cost the once-high-spirited Elizabeth Walters her best friend and her father, leaving her unprotected and alone. She flees an unwanted marriage, seeking safe haven, but what she finds is something she never expected. When her kindness and her beauty bring her to the attention of William, and then the king, she will have a choice to make. After all, can a notorious libertine really be capable of love?”


What a great story!!! I enjoyed this book extremely!!
Childhood friends Lizzy and William are sepatrated at the age of about 12, they were neighbors, but their fathers fought on oppisite sides of a war. In adulthood William wounded and running from an army of soldiers persuing him- hides out in Lizzys house for a night. Lizzy instantly knows who he is, but William doesn't recognize her. She tends his wound and he leaves- saying that if she ever needs something he will be forever in her debt.
Lizzy's house and land are taken from her for helping William ( a crimal) and she is forced to move to London. When the new king takes the thrown Lizzy goes to the castle to ask for her lands back- William happens to be the new kings good friend he finally reconizes her as his childhood friend and the woman who saved his live. He helps Lizzy form a plan to get her house and land back.

Both Lizzy and William had hard lives in between the times they knew each other-- William releases his anger by writing poems and is know as the court poet--
The book is full of great poem, and I enjoyed how William was able to come up with a poem right on the spot.
This book is loosely based on a real poet and the author tells about him at the end of the book-

Highly recommended!!
Posted by AaronB at 6:00 AM